About a female worker who kept a diary to protect herself in a factory with poor working conditions in the 1970s.

In the 1970s, Je-hee, a literature buff, comes to the city with poverty on her back, and she wants to become a writer. However, she becomes an insignificant servant in front of the huge machines of the factory. She becomes exhausted all the time, and there is no time for her to eat or even go to the bathroom. Despite all this hard work, Je-hee’s only pleasure is to keep a diary every night. Then Seon-ok, who looks like a college-student-turned-laborer, appears in her life. She decides to gather the voices that represent themselves rather than the factory, Seon-ok is arrested as an instigator of the rebellion. The female workers’ gathering is about to disintegrate as soon as it starts. Will she be able to represent the voices of the female workers?

This film is the story of female workers forming a union in the 1970s. But, this is not the story of noble heroes and fighters. It is an adventure story in which ordinary people have the courage to live as human beings.With the story of the private and intimate diaries of female workers being expanded into social voices, I intend to deal with female workers’ subjectivities, which have always been present in the corner of our school books, but have never been dealt with in earnest in films. It is a work that requires courage today, when poverty and hatred over the weak are rampant. 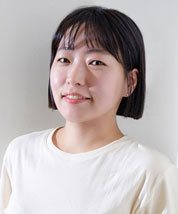 KIM Jung-in
Her short film Cheong (2012) won the Special Prize of the Generation Kplus International Jury at Berlinale. She participated in the production of feature films such as MAL·MO·E: The Secret Mission (2018) as a script supervisor.
Frog (2011), Cheong, Night Cruising (2021)
CONTACTcharmingclub1978@gmail.com
Jeonju Office