Producer Seo Jin-ah goes to an island to uncover the identity of a “monster.”

Jin-ah visits an island to film an unidentified monster in Bieungdo. During her search, she comes across Chi-seung, an internet streamer whose purpose is the same. Soon, she is in conflict with Chi-seung, who attempts to capture the monster using a dangerous trap. Finally, she finds the monster. But, the monster is in pain, caught in Chi-seung's trap. The monster threatens Jin-ah, but she courageously approaches the monster to unlock the trap and takes care of the wounded monster. After that, Jin-ah and the monster get drawn closer. Then, one day, she finds an old ID card with the name Kim Seung-gu. She goes down to the village and shares this information. The next day, with news that the monster is a murder suspect, filming crews visit the island with everything ready. She has to take the people, who are equipped with cameras and weapons, to the wounded monster.

How far do we want to observe the lives of others? Whenever social issues draw public attention, so-called reportage contents shot through hidden cameras are easily created and distributed on Internet broadcasts. An odd man or a monster hides on an island to avoid the gaze of others, and the protagonist who wants to film such a monster. The protagonist judges that the life of the odd man is wrong, and concludes that leading the odd man into society is the way to save his life. However, the odd man is never happy with this decision and rather suffers from the destruction of his peaceful and stable life. What this film aims for is a world where the diversity of individuals' lives is respected. 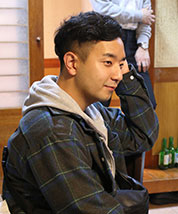 HUH Gun
Started his film career with the short film Mayday in 2015. He has made short films in a variety of genres. From 2017 to 2019, He organized a local film festival named "Neomeongul Film Festival." The process of organizing this film festival was captured in my feature-length documentary Beyond Fest.
A Man's Man (2020), Out of Season (2021), Beyond Fest (2021)
CONTACTalfo_gun@naver.com
Jeonju Office